Blockchain has been the driving force behind technology changing in most of the industries that we deal with in day-to-day life. From the fintech sector becoming more secure to the betting industry moving towards modernization and transparency, blockchain is changing things for the better. However, there’s one industry that’s so vital to our lives that it has to be looked at more closely.

Since healthcare includes many different directions: dentistry, surgery, inpatient care, etc, there are plenty of ways blockchain can reshape the industry, ones that will make life easier for both doctors and patients.

We aim to discuss the new breakthroughs in the healthcare industry that were brought on specifically thanks to blockchain. However, we’ll also try to spot the areas that could still use improvement and show how the technology could help with that.

Competition runs high in the pharmaceutical industry and new trials, tests, and research are run every day. However, the data from these is sensitive and must be secured to prevent tampering from rivals and loss of acquired information.

By relying on blockchain as a means of security, the pharma industry can stop illicit activity in its own market, protecting data that might be at risk of being snatched away by unethical competition. Since new drugs are vital to the healthcare (and healthcare marketing) efforts, any solid information on them is worth its weight in gold after all.

There’s also the risk of data being deleted or changed by accident, especially by someone without proper experience and clearance. Since drug trials are often classified, it’s necessary to establish permission-based access to the end-data. That’s exactly what blockchain can do for you with private network configuration, smart contracts, and other solutions.

Even at the surface level, there are plenty of dangers to data that blockchain negates:

Depending on a company’s size, you could even use a custom private blockchain from scratch, which would have several levels of permission established and a custom consensus mechanism. This would make sharing data between departments and branches easier, giving the process a streamlined structure.

Too often doctors face the issue of patients falsifying prescriptions or using the same prescription notes multiple times, all in an effort to get an extra dosage of medication.This is both a health hazard to the patients themselves and a huge risk to the doctors who might be held liable for these irresponsible actions.

Similarly, a drug store might be blamed for selling counterfeit drugs when they, in fact, assumed them to be the real deal, delivered by their regular supplier. Yet again, the blaming starts with tangible proof of fault often unavailable.

But blockchain can be used to prevent both of these situations or, at least, make it easier to resolve them. Using immutable ledgers, a blockchain-based drug supply app can track the delivery and handling of medication, guaranteeing that each step is surveyed and any illegal or suspicious activity is noticed and reported.

Similarly, that same app also prevents patients from using the same note multiple times. It registers the note being used and immediately blocks it from further attempts to buy drugs. Moreover, you could also enable online drug orders and delivery without risking the medication falling into the wrong hands.

At the core, this application is similar to the pharma industry one. Healthcare professionals can use smart contracts and permissioned nodes to handle access to EMR and limit who can see this sensitive data. However, there’s more to the way blockchain can be used in patient-doctor relations.

By recording the patient’s consent to medical procedures via blockchain, you can comply with regulations, receive an immutable proof of consent, and guarantee a digital trail for all of your decisions. This makes the process of getting consent much less convoluted and likely to cause trouble.

In terms of record-keeping, there are several core reasons for blockchain:

You can ensure that the patient data isn’t seen by those who don’t have the proper clearance. Plus, blockchain, if used in conjunction with mobile apps, can make it easier for patients to actually fill out their records.

Yes, instead of standing in line and waiting, the patient can fill out all the necessary forms on their way to the hospital. This saves a lot of time and, in general, typing in the info or choosing from several pre-set options is much faster than writing in all the answers.

While this may seem like a minor issue of patient service, faster hospital visits mean more people served without compromises to the quality of care. That, in return, means more patients will get diagnosed and fewer complications will be had.

Plus, it’s easier for a doctor to quickly look at a digital version of the patient’s records than to ruffle through several sheets of paper. The convenience of electronic data collection is a clear enough benefit to support blockchain integration and make it worth your while.

It also helps with decentralization, which is important if you want to keep your records safe. Storing them physically or, in particular, in just one location puts them in danger of being lost in the archives, destroyed in fires and floods, or even stolen.

Decentralization will help keep the data secure and safe from disasters, ensuring that the records don’t just disappear. Considering how useful the history of illnesses in the family can be to diagnosing particular conditions, decentralization and preservation are the only viable options moving forward.

Decentralization also guarantees fault tolerance, which means you’ll always have access to the info, even if one server shuts down. In healthcare, where patient records might be needed at any moment, this is absolutely vital.

Not to mention that decentralization helps in sharing info between different hospitals, which could potentially save lives and further important research. The benefit of readily available records and databases will make the whole hospital infrastructure more efficient.

The reputation of any hospital or medical institution hinges on the quality of its care and the professionalism of its doctors. However, in a large enough institution, some mistakes are bound to be made and there have been quite a few horror stories of people with fake credentials building careers.

Thanks to blockchain, hospitals will get a new way of checking the credentials of any new potential staff member. And an easy one at that, which is the one area where other credential-checking methods tend to falter.

It’s not the most exciting and cutting-edge solution but it’s one that’s important to both patients and medical institutions, guaranteeing safety and high-quality service.

It wouldn’t be an exaggeration to say that people are unhappy with the insurance system nowadays. With payouts being stalled or, really, not coming at all, the trust between the insurance company and the patient is as weak as it’s ever been.

However, with smart contracts in place, small insurance claims could be resolved in a matter of minutes. As soon as the insurance agent confirms that there is cause for a payout, the smart contract can instantly release the sum to the claimant.

Also, blockchain can stop both parties from changing the terms of their agreement in any non-consensual way. With immutable records of everything and permissioned access, blockchain is just the thing to establish transparency and prove that insurance companies are operating honestly.

Plus, blockchain can help insurance companies track patients’ medication-taking regime at least somewhat more accurately. This helps ensure that their condition isn’t worsened by negligence but by their actual medical conditions. Those kinds of details are vital for insurance cases.

By trusting blockchain’s immutable records, insurance companies can prevent fraud and avoid some major losses every year. According to the FBI, American insurance companies lose around $40 billion yearly to insurance fraud. And the number, of course, grows if you take the global statistics.

Once you’ve used any medical data you gather for research, it’s pretty much served its purpose. And while some of this data might lead to important medical discoveries and indirectly bring a profit later on, why not get something back right away?

By using blockchain, you can directly trade the data that you no longer need on a special marketplace. This allows you to instantly make back some of your expenses while helping out others who require the same kind of data for their trials or research.

A free consultation will help you to succeed

Medical claims take a long time to process, sometimes up to a month or two. Well, at least that is the way it has been done for years. However, we’re talking about disrupting the industry today and that means this painful wait will not be the norm any longer.

Instead of waiting for a human to take their time and send in all the paperwork, we can put the task on the shoulders of blockchain. What would that do? Oh, only reduce the wait time from weeks to minutes or hours.

This kind of faster patient processing boosts customer satisfaction and makes the whole system more efficient, guaranteeing that hospitals work faster and deliver stronger results. It’s not all about optimization of income but rather making the system run according to modern standards.

So aside from cutting wait times, here’s what blockchain automation does:

Hospitals and medical research centers, especially ones in different jurisdictions, might run wildly opposing data management and storage systems. This often leads to confusion when the time comes to transfer some records or share research information.

That kind of issue stalls inter-institution communication and cooperation, leading to slower research and patient care. As you know, this is definitely not up to modern standards. And, of course, it can be solved with the help of blockchain.

Blockchain will help create a unified database of all documents and records, opening it up to many institutions simultaneously. And, to prevent unauthorized usage and editing of classified data, you can use nodes and smart contracts to keep the access multi-tiered and nuanced.

If you use this kind of unified system, there will be no more clashing between different hospitals and institutions’ storage.

Granted, blockchain doesn’t come for free. For one, it literally isn’t free and it’s not always cheap. If you want to do things right, you’ll need experts and, oftentimes, a custom private blockchain. While it will pay for itself in no time, the initial expenses have to be accounted for during the planning phase.

You could rely on a public blockchain to accomplish your goals but, in that case, you need to remember that public variations often come at the expense of speed. In an industry as vital as healthcare, speed is of the essence as a few extra minutes might literally decide someone’s fate. 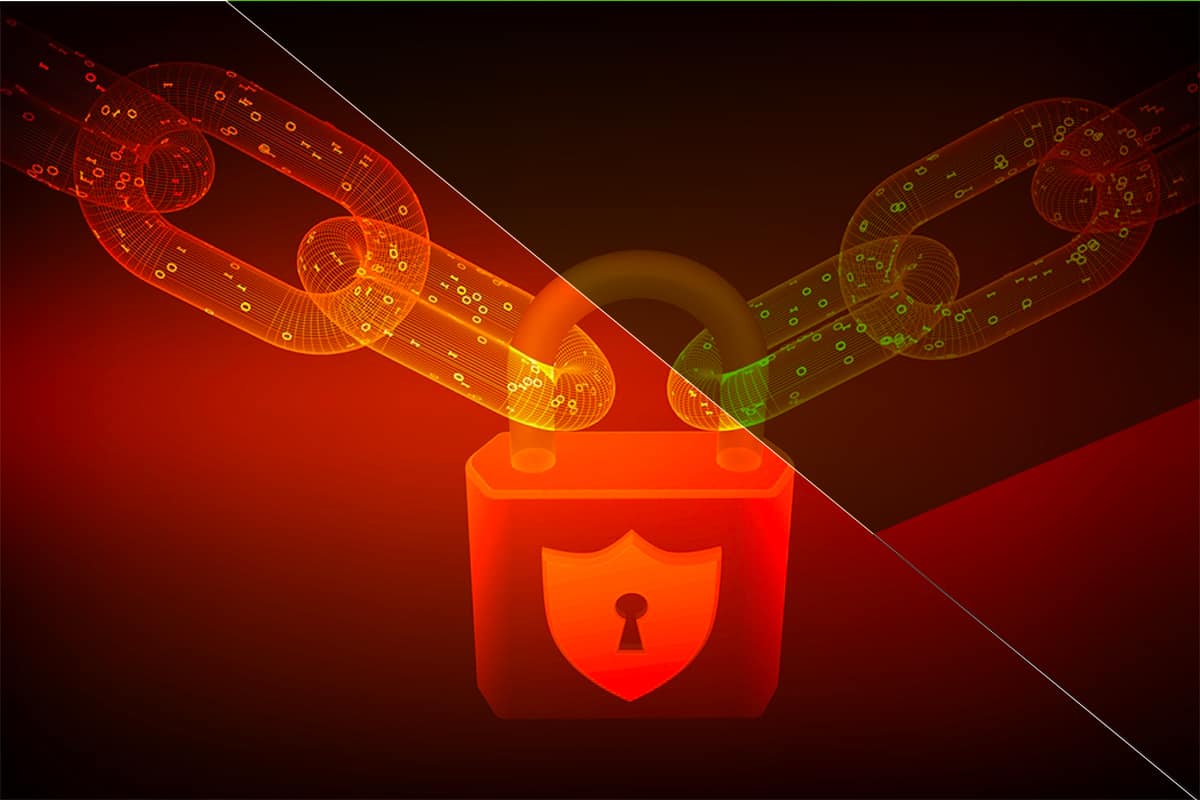 What do you get when you put two chains together? If it’s blockchain and supply chain – an efficient, modern, and fraud-free supply process! Click on to learn more about its benefits.